When my family and I went to Paris, France, we stayed in the Marais neighborhood and happened to come across Season by accident. I wanted to go someplace for afternoon tea, but unfortunately it was closed, and this place looked like a hip and trendy place, so we thought, hey, why not?

My sister ordered their shakshuka, and I had zero clue what that was, but when it arrived, the aroma was HEAVENLY. I am a huge fan of almost anything with tomatoes, and this Moroccan dish was no different. The smell of the food was making my mouth water as I sat with my acai bowl in front of me (that was super yummy and refreshing too, though!)

The shakshuka looks deceptively simple, with some spices, fresh tomatoes, and veggies, topped with an egg. It can be too salty for some people, but it goes great with bread, and I’m sure you can eat it with rice or pasta as well if you want to make it at home, like I decided to try… 🙂

My sister was prepping for a barbeque one weekend and we had leftover veggies that were meant for shishkebobs, and I thought, hey, why not try making my own shakshuka? What could go wrong!? Luckily, nothing did. It looks simple to make, and turns out it is! I googled some recipes to figure out the spices used and decided to wing it from there. 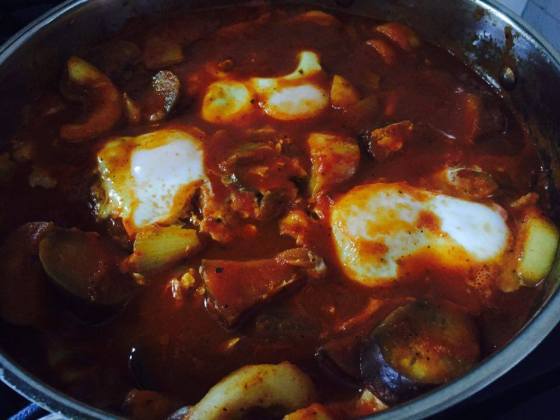 This recipe is surprisingly really easy, and is great when you want a quick meal that can feed a group of people. It lasts for a while too, especially if you decide to eat it with some carb on the side, such as bread, rice, or pasta!

ALL PHOTOS ARE ©magnetically aesthetic. Please do not steal, edit, or use these pictures in any way without my permission. Thank you!

Belinda is a sustainability blogger based in New York City. With her background in public health, she is passionate about helping people practice low impact living and inspiring them to become changemakers in their communities to protect the environment and planet. View all posts by Belinda